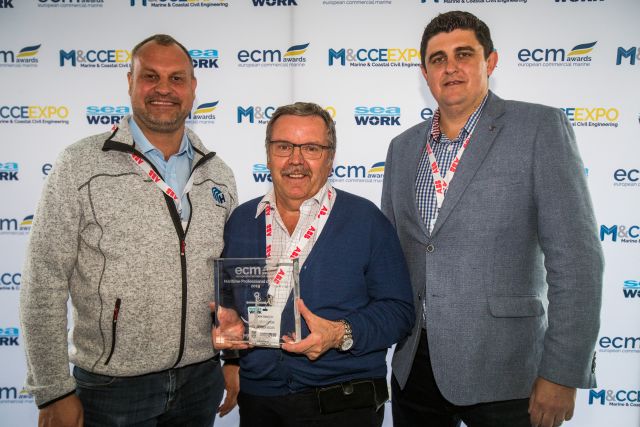 Did you know that a week ago today – Mark Ranson was celebrating becoming the European Maritime Professional of the year?!

The European Commercial Marine Awards (ECMAs) winners were announced during a packed ceremony held at the Golden Arrow Marine Restaurant on site at Seawork on the evening of Tuesday 11th June.

The Maritime Professional of the Year Award, sponsored by MHO-Co and presented by Mik Henriksen, CEO of MHO-Co, went to Mark Ranson of the National Workboat Association.

Nominated for his ongoing hard work and commitment to the workboat industry during the last 8 years as Secretary / CEO of the National Workboat Association, it was explained that this drive and enthusiasm has continued to grow even into his last days in his role – before handing over the baton to Kerrie Forster.

During the NWA dinner on Wednesday night (12th) presentations were made and announced for the following persons for their long commitments to the NWA;