Norman Finlay MBE. “The Grandfather of the Workboat Industry” 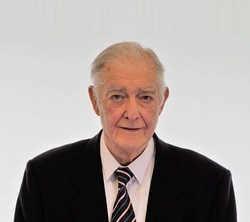 Following a career at sea and then as Superintendent of a dredger fleet, Mr Finlay became involved with workboats early in his career, and went on to become one of the main driving forces behind the establishment and development of the UK Workboat sector of the Merchant Navy in the 1970s, playing his part in the rapid development of the industry and in the technical advancements made.

He continued to work in the industry ever since, running his own Surveying business he became President of the SCMS and through this network became the key player in the development of the original Workboat Code with the MCA (then the MSA) in the early 1990s and the revisions ever since. This project became the forming of the Workboat Association in 1994, of which Mr Finlay took the role as Secretary until 2011, then Life President.

In 2013 Mr Finlay was awarded the Lifetime Achievement Award (pictured) at the Seawork Mercator Media Awards, followed suitably by the award of a MBE by her Majesty the Queen in 2018 for his services to the sector.

My own connection with Norman came soon before the time he received his Lifetime Achievement Award at Seawork 2013, Norman was still actively surveying vessels all over the world at this point. He was tasked to visit a couple of vessels that my company owned in North Wales, the then Manager of our company was having serious problems getting authorisation for a visitor to access the site to see the vessels (even if it was on official duty). After arriving at the Port Norman calmly said “Leave it to me, I’ve been in this business a long time”, he drove away. 10 minutes later he was spotted walking in full PPE and with a Harbour Master’s escort across the other side of the Port towards the vessels: “first job done” he said as he smiled back and waved, ready to board the vessels.

Since playing a more active role in the Association, first as a Committee member, then as CEO, my relationship with Norman quickly grew into one of a mentor towards his under-grad. Norman wasn’t a person to waste time, car journeys or time spent in his home-office were made up reliving important historical lessons connected to the Offshore Contracting Industry, facts about why certain processes have to happen in particular ways, providing me with personal contacts and backgrounds to expand my network and of course a lot of dreaming about the good ol’days. This education has been very important to me.

Norman moved from Belfast to the River Mersey in his youth, his family back home also in the maritime industry at the famous Harland and Wolf Shipyard. When I informed him at the start of this year that the Association had sponsored an area of woodland [Storeton Woods, Bebington] close to the River Mersey, he paused, his tone lifted and he quickly started recalling lots of memories of spending his leisure time in and around the woods.

At Seawork last year myself and Norman hosted a “Workboat Industry FAQ” session with some Apprentices currently studying for a career on Workboats. He told them the story of how for many years he had managed the operation of a small workboat, permanently chained to a small pontoon, which he used in dredging projects to move the cutting heads around sites [as seen on a large painting in his office]. When the time came to take the workboat out of the water for survey, Norman explained “after 24hours of blood, sweat and tears trying to remove the chains and associated connections, it became obvious this was going to be a one-way process!”. A member of Damen Shipyards said to him “With some trialling, we might be able to fit some drive-legs directly onto the pontoon if you think it could be worth the investment?”, “Well” Norman said “soon after it was launched it was fitted with a small shelter, mainly to protect the controls; right there we had the World’s first Multicat”.

One of the Apprentices said to me after the event “Thank you so much for talking to me, I cannot believe I actually met the man who invented the Multicat!!”

I am sure Norman would have been more modest!

To those that worked with him, Norman Finlay was a true Professional. To anybody who knew Norman, he was an honest Gentleman.

We offer our greatest sympathies to his Wife and Children; Alison, Fiona and Heather. All of whom have become a part of the Association and its members lives over the last 25 years.

Norman, as we watch you depart port for the last time, we lower our flags to half-mast in memory of a man that has supported so many of us to become who we are today. You’re leadership, encouragement and passion has been the driver that has set the foundations for our industry.