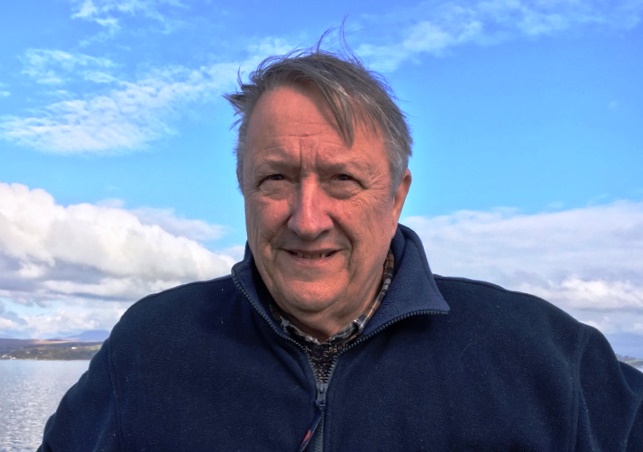 One of the new Individual Members; Maritime Professional ‘Allan Gray Marsh’ takes a look back at his career and informs us what Allmar Marine Services has to offer.

Can you remember your first time on a boat?

My first experience on a boat was in Charlestown, a small village on the North coast of the river Forth, about four miles upstream from Rosyth. There was a breakers yard there with two submarines and about a dozen deep sea steam trawlers. My friend and I would cycle from Dunfermline and sneak through the fence to explore the boats as much as we could before the watchman became aware of our presence and chased us!.

The first boat I sailed on was a rowing boat during my pre-sea training onboard the TS Dolphin in East Old Dock, Leith. All cadets had to learn to skull (using a single oar over the stern) and it was a race to see who would be allowed to take the boat on his own. We had to recite the compass points, in quarters forwards and backwards after which we were awarded our compass badge and allowed to take the skull boat on our own.

Where did your professional maritime career start?

I was apprenticed to Furness, Withy & Company Limited, and as I write, I glanced up to where my indentures hang on the wall of my study. I was one of the last apprentices, the following year 1965, saw the introduction of cadets. I served on general cargo ships, partial refrigerated ships and a tanker and travelled to the East and West Coasts of America, North and South, as well as the Arabian Gulf, Africa and Europe. My second voyage was through the worst storm of the century in the North Atlantic, and recorded in my apprentice journal.

What maritime roles have you completed in your career? Where there any highlights?

I gained my master’s certificate in 1979 and was promoted master on chemical and gas tankers the next year. I was made redundant in 1984 which seemed to be the beginning of the end of the UK merchant fleet. I found a job as a surveyor and consultant in London investigating personal accident and cargo claims. It was a time when crude oil mysteriously converted to salt water during the voyage!!! This lasted 18months or so, when the business folded, however my employer very kindly suggested I work from home and passed over a few clients. I was awarded a contract by the MOD to carry out biennial surveys on sea cadet boats based in the north of England and Scotland. This was in fact my introduction to quality management. I was advised that as a prime contractor to MOD I had to obtain AQAP 1 quality status ( actually not possible for a small business). I worked with the Centre of Advanced Maritime Studies and wrote and delivered the first training courses for Port State Control for IMO, I also conducted some of the first pre charter inspections for Exxon Chemicals, now incorporated in the SWIRE inspections. I published a monograph for the nautical institute on Quality Management in Shipping. All before ISM.

Between 1993 and 2001 I worked in ship management. With Serco Denholm I led the team who brought the Clyde fleet of 26 vessels into civilian control and the jurisdiction of the MCA, as well as introduce the ISM Code. The boats were predominantly workboats and tugs and although most were below convention size, we believed best practice was to include the whole fleet and in a practical sense operating to a single standard was just simpler.

In 2002 I joined the MCA as a surveyor in the Enforcement Unit and between then and 2018, investigated all significant marine accidents in Scotland and Northern Ireland. Almost 800, of which around two thirds involved fishing boats and workboats. There were many deaths, which I found quite difficult, and the aftermath of those accidents was traumatising for everyone involved. Accident Investigation is retrospective by nature and as you piece together the evidence the story gradually unfolds until you have a clear idea of what happened and who, if anyone, was responsible. There is usually a sequence of events, the elimination of any one of these may result in the accident not happening. In every case, had there been a robust safety system in place, it may have identified any, or all, of the elements leading to the accident and if action had been taken, the accident may not have occurred. Most major incidents were the result of systemic failure both by management on the ship and ashore.

What have you observed of the Workboat industry during your time as an industry stakeholder?

It was quite clear in the early days that the legislation was well behind what each fleet needed, but more importantly the training for Workboat Seafarers was and still sometimes remains poor. When I began my career everyone who went to sea did three months pre-sea training regardless of rank or department. Now all you need is a <1 week basic training course.

Work boat crews have the same responsibilities as their deep sea counterparts, but significantly less training. Very recently requirements for safety management systems have been introduced. Big groans, I know, but a good system is not so difficult to achieve. Offshore supply boats once held the reputation of the most dangerous job, but today their safety record is second to none.

The Scottish Fisherman’s Federation has taken the bull by the horns and introduced the “safetyfolder” to help fishermen from single boat operation to small fleet operations comply with the legislation. Its free and simple to operate! Short on training if I’m honest, but the concept is great.

Workboats are much more complex. The industry has increased exponentially over the past ten years. It is often at the forefront of technology and certainly ahead of the legislature. The operations they undertake range from simple logistics to heavy lift. They transport passengers and have to transfer them through a range of tide and weather conditions. There is an ever increasing range of products, including hazardous products which they transport. They are involved in windfarms and tidal generation schemes. In short it’s a very exciting place to be.

Currently you work under the name ‘ALLMAR Marine Services’, what services you offer?

I retired in 2018, and formed Allmar Marine Services. After a lifetime’s work its not easy to just stop so I was looking for a way to gradually slow down over the next few years. Some folks I had met over the years asked me to help develop their safety systems to comply with the legislation which has recently been introduced and to train staff in auditing etc.. I’ve also been involved in operational safety training and developing training courses in workboat stability and the Dangerous Goods Safety Adviser.

What is your operational area and typical client?

My client base extends from Scrabster to the Clyde and includes workboat and fishing boat owners with up to six vessels.

You recently joined the Workboat Association when we announced the new membership category ‘Individual Corporate Member’ last month, what was your   interest to join the Association?

I have been aware of the Workboat Association and the work it does for quite some time, it was only recently I learned that they accepted members who did not own or operate boats, but never the less were stakeholders in the industry. It was an easy decision to apply for membership. I’m looking forward to meeting members, particularly in the safety forums, where I hope that I may share some of the insights that I’ve gained over a lifetime in shipping.

Do you have any advice you could share to those looking to expand their careers in the maritime industry?

When I started my career the UK merchant fleet was one of the largest in the world. Today it is one of the smallest. The Workboat industry was quite small, tugs, barges, dredgers and beach launched pleasure boats.  This has all reversed!

The Workboat sector is growing in size, complexity and technical innovation. It demands higher skill sets and promises great rewards for those who are prepared to work hard, work flexibly and find solutions to the problems that have to be overcome. You can have a career at sea, but combine it with a family life in a way you simply couldn’t before. Todays challenges are in Artificial Intelligence and new fuel technology, who knows what tomorrow will bring.